Malt are germinated cereal grains that have been dried in a process known as “malting”. More precisely, malting is a general term used for a process of converting barley or other cereal grains into malt, for use in brewing, distilling, or in foods. These grains soaked and drained to initiate the germination of the plant and takes place sometimes called a malthouse, or a malting floor. 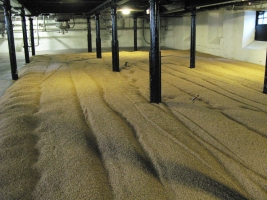 The purpose of malting a grain is activates enzymes which start converting its starch (complex molecules) into fermentable sugars that can be used by yeast. Malt also contains small amounts of other sugars, such as sucrose and fructose, which are not products of starch modification but were already in the grain.

Thereafter the brewer and distillers crushes the malted seeds and soak it in hot water to reactivate and accelerate the enzyme activity, converting the seeds’ starch reserves into sugars. The resulting sugar is boiled and eventually left to ferment by adding yeast and the produce is a sweet liquid called wort. This process is named mashing.

Generally, malted grain is used to make beer, whisky, malted shakes, malt vinegar, confections, flavoured drinks, and some baked goods and so on. For example beer can be brewed from pretty much any malted grain though barley is the most common, also are used wheat, rye, oats and rice.

Colour of the Malt

There are lots of different ways to assemble a beer of a particular colour; this means that two beers with identical colours can have considerably different flavours. A minor amount of a dark malt will create a radically different beer than one brewed with a higher amount of lighter malt. Even different malts of the same colour can have hugely different aromas, produced by different moisture levels or temperatures during kilning.

The majority of malt flavour and aroma derives from Maillard browning; however, there are some malt varieties where non-Maillard caramelisation dominates. Instead of the usual malt aromas of bread and roast sensations, the aromas of caramel malt range from sweet caramel to toasted marshmallow all the way to burnt sugar.